UVA and NRAO have very active extragalactic research groups. Research topics include studies of star formation and the interstellar medium in normal and “star bursting” galaxies, and the study of the properties of active supermassive black holes and the galaxies that host them. The samples include galaxies in the local Universe and those out to cosmological distances (where the light we see was emitted when the Universe was a fraction of its present age). Studying these galaxies and their associated phenomena requires observations at multiple wavelengths. Both space- and ground-based telescopes are used for this work, with a significant amount of the allocated observing time coming from radio/submm facilities and optical/near-IR facilities that UVA has guaranteed access to. Below is a brief summary of some of the topics being studied:

Star formation in nearby normal and starburst galaxies

Nearby normal galaxies like the Milky Way are presently observed to be evolving in a fairly passive manner, whereas starburst galaxies are observed to have elevated star formation rates (SFRs) and (sometimes) active galactic nuclei (AGN) activity that is often triggered by gas-rich galaxy interactions and mergers. By studying the properties of nuclear and star-forming regions in galaxies which span a range of morphologies, stellar mass and energetics, we hope to gain a sense of the universal physics driving these phenomena. Specifically, the regulation of star formation, the growth of central supermassive black holes and the effects of feedback from both of these phenomena on shaping the properties of their host galaxies. We observe their activity to be increasingly enshrouded in dust as a function of the total energy output of these galaxies, with late-stage galaxy mergers having optical depths approaching unity at 60μm. Thus, we primarily make use of long-wavelength observations (space-based infrared telescopes, the VLA, ALMA, and the GBT) and X-ray telescopes to peer into these dusty regions. The active surveys related to this research at UVA/NRAO are the Star Formation in Radio Survey (SFRS), Physics at High Angular Resolution in Nearby Galaxies (PHANGS), the Dense Extragalactic GBT+Argus Survey (DEGAS) surveys for normal galaxies, the Great Observatories All-Sky LIRG Survey (GOALS) of luminous infrared starburst galaxies, and the ALMA Comprehensive High-resolution Extragalactic Molecular Inventory (ALCHEMI) of the prototypical nearby starburst galaxy NGC 253.

Figure 1: HST images of three luminous infrared galaxies and an elliptical galaxy (i.e., the byproduct of a gas-rich galaxy merger). The galaxies are shown in the evolutionary time sequence of a gas-rich merger event where the AGN is optically visible in the latter stages. Galaxy mergers build up the stellar bulges and central supermassive black hole masses, and feedback from both processes help to shape the stellar mass functions of galaxies. Nearby normal galaxies have stellar bulge-to-supermassive black hole mass ratios of ~ 1000, which is indicative of a regulatory process occurring in the central regions of galaxies during active phases of growth.

Studying the centre of the Milky Way galaxy (Sgr A*, the supermassive black hole and surrounding regions) gives us the unique opportunity to study several aspects of black hole physics, and star formation in galaxies, with high spatial resolution. Sgr A* accretes at several orders of magnitude below its Eddington luminosity, and multi-wavelength observations of Sgr A* (using space-based X-ray telescopes such as Chandra and XMM-Newton, ground-based NIR telescopes like the VLT and Keck, and radio and sub-mm interferometers such as VLA and ALMA) allow us to better understand accretion processes in low luminosity galactic nuclei, while studying star formation in the region gives us insight into star formation processes in extreme environments. 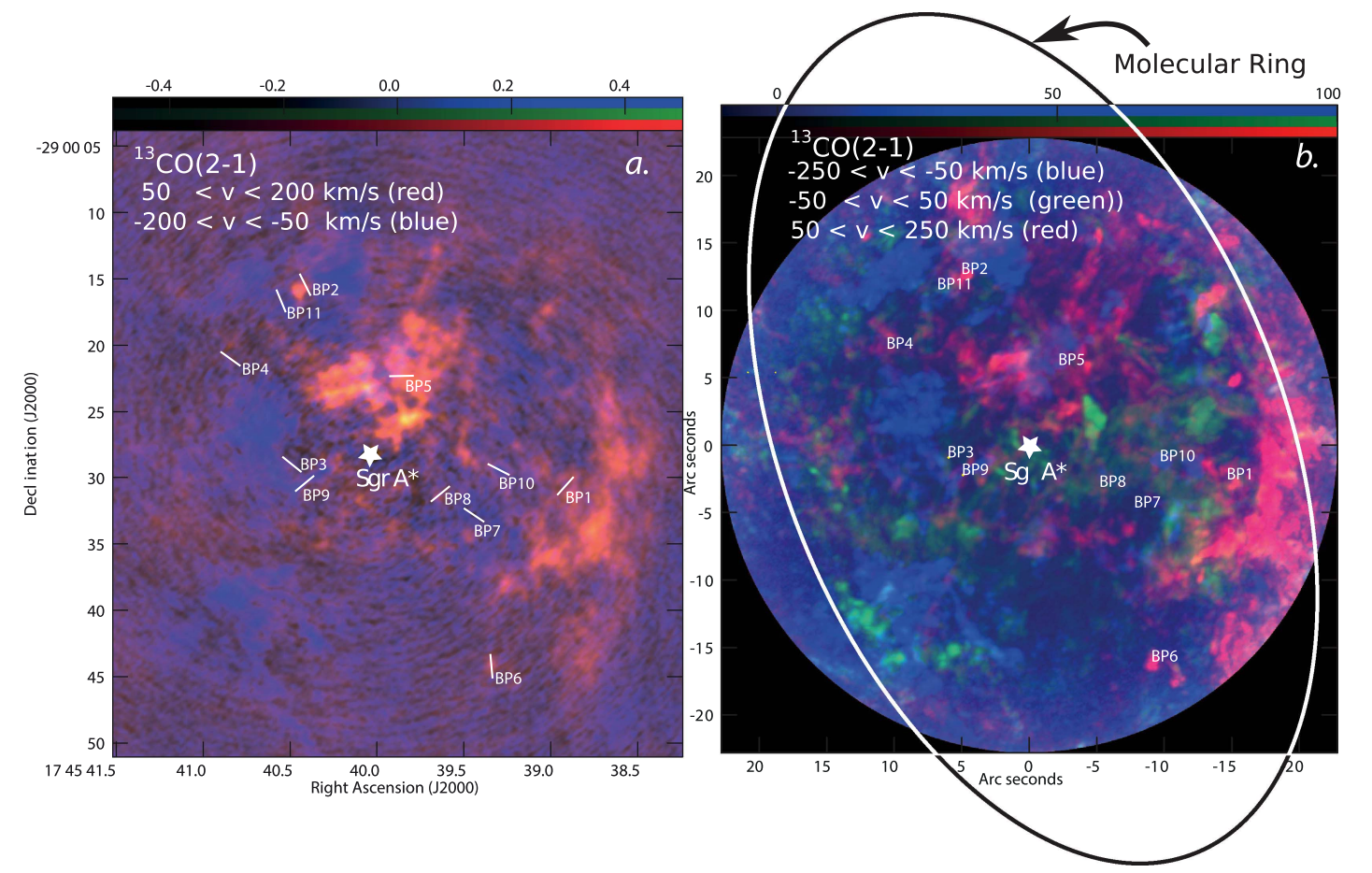 Figure 2: ALMA observations of the central parsec of the Galactic center revealing the presence of 11 bipolar sources (Yusef-Zadeh et al. 2017), possible evidence for low-mass star formation in the region. Left: The positions and PA of the 11 sources superposed on a 13CO emission map. Right - The distribution of 13CO showing peak emission at velocities ranging between −250 and 250 km s−1. The ellipse shows the molecular ring detected in HCN (1-0) (Christopher et al. 2005).

Our focus is on supermassive black holes in their active (AGN) phase. We study these in the environments of luminous galaxy mergers where we aim to understand their energetics relative to starburst and how feedback affects the properties of their dynamical evolving host galaxies. In nearby, classical AGN-selected galaxies, we measure their masses and the distances from us by studying their associated megamaser emission. The distance measurements are of cosmological significance - their accuracy allows us to constrain the Hubble constant (i.e., the Megamaser Cosmology Project, or MCP). We also search for an interesting class of AGN, harboring binary or recoiling supermassive black holes using radio-optical observations and study the radio jets from AGNs showing a peculiar radio morphology (X-shape or Z-shape) to understand their formation mechanisms. 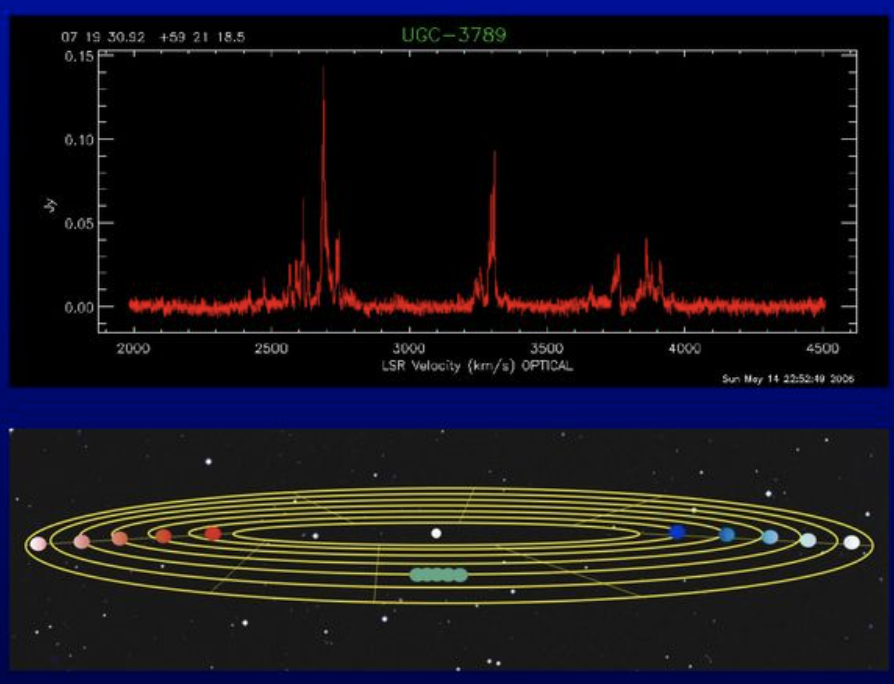 Figure 3: A spectrum of water megamaser emission from a disk surrounding the supermassive black hole in the galaxy UGC 3789. In the accompanying schematic, the relative positions of the disk of water molecules and the supermassive nuclear black hole are shown. The dots in the disk show the location of water maser emission detected by the VLBA (redshifted, blueshifted and systemic represented by red, blue and green, respectively). The observations make it possible to derive accurate supermassive black hole masses and distances to the host galaxy, the latter which enables accurate measures of the Hubble Constant.

A large population of quasars are dust-obscured and thus missed by standard UV/optical AGN surveys. Broadband mid-infrared diagnostics developed by Lacy and his collaborators have been used to identify these reddened quasars out to high redshifts. This is allowing us to gain a better census on the entire AGN population, the cosmic history of black hole accretion and the nature of the host galaxies in which obscured and unobscured AGN reside. In an infrared/radio selected AGN sample, we study their radio spectral energy distributions and radio morphologies to measure the youth of the black hole activity and the physics behind the interaction between AGN jets and their host galaxy.

We are engaged in the study of large reservoirs of star-forming molecular gas across enormous Lyman-alpha nebulae in galaxy protoclusters at redshifts of 2-4. This gas is being detected by using low-resolution, short-spacing ALMA and VLA observations. The goal is to study the direct link between the circumgalactic medium and the stellar growth of these massive nebulae. 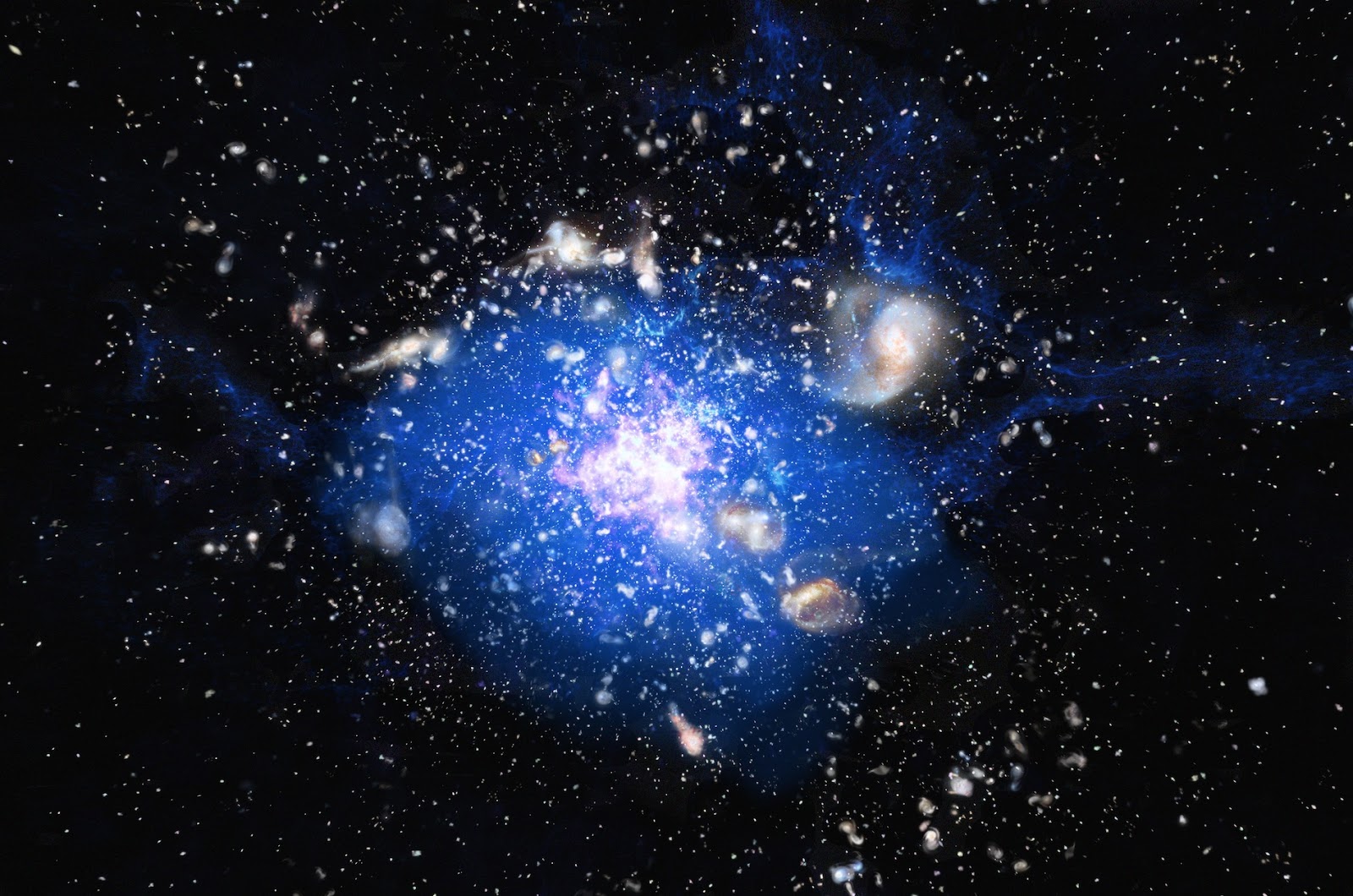 Figure 4: Artist’s impression of a large reservoir of cold gas discovered in the heart of an embryonic cluster of galaxies. Cold gas reservoirs like these can stretch across  a quarter of a million light-years, and form the raw material out of which new stars are born. Image modified from ESO Science Release 1431. Credit: ESO/M. Kornmesser.

Observational evidence suggests that the integrated star formation rate density (SFRD) in the Universe correlates with the accretion history of supermassive black holes (SMBHs) resulting in the coeval growth of SMBHs and their host galaxies. While this general picture of galaxy evolution still lacks a detailed physical understanding, the emerging consensus is that mass assembly is regulated by gas accretion from the intergalactic medium, major/minor mergers, and feedback from star formation/SMBH activity, which in turn imprints strong signatures on galaxy morphologies observed in at UV/optical wavelengths.  While highly valuable, such observations are often affected by dust obscuration, especially at high redshifts where dusty star-forming galaxies (SFGs) appear to dominate the SFRD (Figure 5). Consequently, we are currently involved with delivering new deep, high (sub-arcsecond) angular resolution radio observations to study the distribution of star forming within galaxy disks at ~kpc scales (at all redshifts), unbiased by dust obscuration in a number of multi-wavelength deep fields including (e.g., the HST Frontier Fields and GOODS-North).  These deep radio data are an essential ingredient of precision galaxy formation and evolution studies as comparing deep HST and radio observations probe different structural components of galaxies at high redshifts, allowing us to better understand how star formation and black hole activity shape the structure of galaxies across cosmic time.

Figure 5: Multi-wavelength view of the morphology of galaxies that can be obtained by combining HST ACS/WFC3 and VLA imaging from the GOODS-N field (10GHz; 0.2”). The contours correspond to the radio continuum emission and start at the 3-sigma rms level. For this example, a SFG at z = 1.2, the dust-obscured and dust-unobscured star formation is traced by the rest-frame UV emission (HST/F435W) and the radio continuum emission (VLA), respectively. WFC3/F160W imaging, on the other hand, traces the overall stellar population. Note that current HST/UV observations are insufficient to trace the bulk of star formation in massive, high-redshift disks (middle panel). A dust-unbiased comparison of the spatial distribution of star formation and stellar mass of high-redshift galaxies is now possible by combining existing HST data with the GOODS-N VLA 10 GHz survey (right panel), whose resolution of ~3x times better than that of other current deep extragalactic radio surveys.